Drafted:  Texas Rangers in the 1st round of the 2010 MLB June Amateur Draft

Growing up in Florida, Baseball was not always Luke Jackson’s number one sport and pitching was not always his forte.  By the time he had finished high school he was one of the top high school arms to come out of the 2010 draft. In our latest installment of Chasing The Dream, we take a look at Luke Jackson and his rise out of the high school ranks and into his professional career.  Besides an interest in baseball, Jackson also had a strong interest in soccer and football growing up. To this day he remains a big soccer fan. When Jackson was playing baseball, he didn’t have the interest as he does now in pitching. He enjoyed playing the infield and swinging the bat.  During his sophomore season of high school and opportunity arose for him to pitch. He seized that opportunity and hasn’t looked back.

As a senior at Calvary Christian Jackson dominated his opponents every time he took the mound. On the season, he was a perfect 8-0 with a 0.90 ERA. Opposing batters only hit .155 against him in his 54 innings off work and he struck out 87 of the batters he faced. During his season Jackson began to turn heads at all levels. The University of Miami recruited the right hander heavily and Jackson committed to furthering his education and baseball career as a Hurricane. Even with the strong committment, a number of MLB teams had other ideas. He was heavily scouted as the draft approached. One of those teams, the Texas Rangers, selected him in the 1st round (45th overall). Texas had received this pick due to the Washington Nationals signing Ivan Rodriguez in the off-season to a two-year contract. 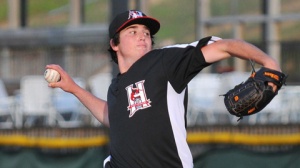 Jackson debuted with the Crawdads in 2011 (milb.com)

After being selected by the Rangers, Jackson had a number of life decisions to make. Most importantly he had to decide if he was going to pursue his education at the University of Miami or start a new chapter of his baseball career as a professional with the Texas Rangers. Along with his family, Jackson weighed the pro’s and the con’s to both decisions. After some negotiations with the Texas Rangers and more discussion with his family, Jackson inked a deal to start his professional career. The Texas Rangers reportedly signed the pitcher to a contract which featured a signing bonus worth 1.5 million.

Jackson did not make his professional debut until the 2011 season when the Rangers assigned him to the Hickory Crawdads. In his first professional season on the mound, Jackson impressed in certain areas while learning what areas of his game needed improvement. In his first season facing South Atlantic League competition,  Jackson went 5-6 with a 5.64 ERA in 75 innings pitched. Over the course of those appearances Jackson struck out batters at an impressive rate of 9.4/9 innings. On the downside, walks were a problem on the season for Jackson, as he walked 5.8 batters per 9 innings.

Heading into the 2012 season Jackson was well aware that fastball command and improved control would be crucial to his success. At the young age of 20 he returned to the Crawdads to start his 2012 campaign. With a years of experience under his belt he improved his numbers across the board during the first half of the season. Jackson was 5-5 with a 4.92 ERA through late June. He had also managed in increase his strike out rate to 10.1/9 while lowering his walk rate to 4.6/9.

In late June he was promoted to Advanced A level Myrtle Beach, which is part of the Carolina League. He made his debut on June 25th and tossed five solid innings (no decision) allowing two runs while striking out one. While there has been a few bumps in the road with the Pelicans there has also been some gems, including his start July 17th against the Wilmington Blue Rocks. In his five innings of work, Jackson struck out 12 batters and only allowed 1 hit in the victory.  At this point in the season, Jackson has made seven starts and has went 2-1 in them with a 5.60 ERA. He continues to strike out  opposing hitters at a high rate (9.5/9) and continues to lower his walk totals (4.4/9)

As he continues to learn from Pelicans pitching coach Brad Holman and other instructors in the organization, Jackson continues to refine his game and become less of a thrower and more of a pitcher. Its pretty clear to see that Jackson could be a dominating force down the road for the Texas Rangers. As the 2012 season enters its final months, Jackson hopes to finish strong and continue to make improvements to his game.

What was it like to be drafted? Where were you at when you found out?

I was at my house with a couple of close friends of mine and of course my family. We were playing ping-pong actually and watching the draft on TV. Then when they called (Texas Rangers) I was pretty excited. I didn’t know who it was going to be. I had talked to a few different teams and when It ended up being Texas I was excited.

You had originally committed to playing baseball at the University of Miami. Was it hard to pass up the experience of College?

It was a little bit. I really didn’t mind going to school. I had to narrow it down to what I wanted to do. I talked to my family a lot and prayed about it. I finally came up with my answer that I was going to go pro.

It wasn’t really that stressful. My dad handled a lot of it and my agency did a great job as a whole. They kinda knew what I was looking for. We kinda had a set number before I was even drafted. We just had to wait for the deal to be approved.

The grind, everyday day in and day out. It wears on you. Pitching every 5th day, getting up over 100 innings. You start to feel a told on your arm, it’s not like pitching in high school.

What is the number one thing that is stressed to young pitchers in the Texas organization? Has the been any coach or instructor that has been a big help to you?

We get into our throwing program pretty serious. Nolan Ryan is a big believer in throwing a lot and long tossing. We really focus on that from the start so we can build up our arms and be ready for anything. As far as a coach, I had Storm Davis for a year and a half and he has been a big help and now Brad Holman. I’ve only been with him a little bit and he has drastically helped me. Especially on the mental side of the game.

What pitches do you throw and what are your biggest strengths and weaknesses of your game?

I throw a fastball, curveball and change-up. I have also been playing around with a slider a bit but I don’t really throw it all that often at this point. I have good life on my fastball and a decent breaker, those two work well together. I’m working on improving my fastball command and throwing them for strikes.

During your July 17th start you struck out 12 batters in just five innings of work. What was the keys to such a successful start?

Me and my catcher were on the same page, we had a great game plan. Brad was in my ear keeping me calm and I stuck to the plan and wasn’t really thinking about it.  At the end I had 12 strike outs, the fastball and curveball were working pretty good and my catcher was putting down the right finger.

Who was your favorite baseball player growing up as well as favorite non baseball athlete.

David Price and Josh Johnson even though those are two current guys. Non baseball athlete I’d have to go with Travis Pastrana, I think what he does is pretty cool.

I’d have to go with Nicki Manaj

Who is the biggest prankster in the Pelicans locker room?

Biggest prankster? I’d have to say the entire Pelicans bullpen. They really get after it.

A special thanks to Luke Jackson for taking some time out of his busy regular season schedule to sit down and not only talk a little baseball with us. Once again please give him a follow at @YaBoy77 and follow us at @CTD_Sypien as we follow Luke during the season as he works hard to achieve his goals and make progress towards the major leagues.