Throughout his Brewers career the power has always been in Nick Ramirez‘s bat, now Ramirez aims to do something few players have done before and become a duel threat at the plate and also on the mound. During his college career, Ramirez was a duel threat at Cal State-Fullerton serving as the teams closer. In 2011 he saved 16 games and posted an ERA of 2.13 while striking out 33 in his 21 1/3 innings of work. Now Ramirez aims to do the same with the Brewers. 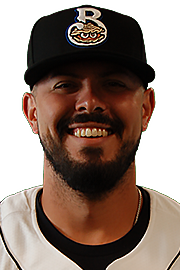 In three seasons at the AA-Level in the Brewers organization Ramirez has always shown a knack for hitting the long ball. In each of his three seasons he has at least hit 14 home runs but has always ran into trouble when it comes to strike outs. During that same three-year period Ramirez struck out in 29% of his at bats. As the season came to an end Milwaukee Brewers farm director Mike Flanagan approached Ramirez “He asked if I would be interested and I threw a bullpen for the first time in five years” Ramirez said. “I pounded the zone, It’s like riding a bike”.

Ramirez won’t be making the full-time switch to the mound and will still be keeping his first base glove broken in. “Well the crazy thing is I’ll be doing both, playing first and pitching” Ramirez said. “It’s been an easy transition to the throwing side since I have already done it before.”

As spring training approaches, the left-handed Ramirez will bring a four pitch mix with him to the mound featuring a low to mid 90’s fastball as well as a change-up, curve-ball and slider. If Ramirez has success both on the mound and at the plate he could make for an intriguing and valuable addition to the Brewers major league roster.  Some may remember the Brewers have had success in the past converting a full time position player into a duel threat. Back in the 2003 and 2004 seasons converting Brooks Kieschnick who not only served as an outfielder but also as a valuable member of the Brewers bullpen for two seasons.