In the off-season leading up to the 2015 season, Jake Brigham found himself looking for work. Brigham had spent the last two seasons pitching at the AAA level in the Rangers and Pirates organizations. There were moments in those seasons that his performance on the mount warranted him consideration for a major league call up. The call never came and for every stretch of success he had there was always injury that seemed to sideline the determined hurler. Brigham found an opportunity with the Atlanta Braves during the off-season but that opportunity did not put him on the big league roster or even in Gwinnett, the Braves AAA franchise. Instead it started in Mississippi as a member of the Braves Southern League affiliate pitching in the starting rotation.

While it may have been deflating to take a step back to AA, Brigham kept fighting and clawing toward his dream of reaching the major leagues. At the age of 27 and over two years older than the average age of the players in the league Brigham started a triumphant march to the major leagues. In a span from May 29th to June 17th, Brigham limited opponents to a .095 batting average and flashed a minuscule ERA of just 1.13. Brigham also flirted with a perfect game on June 5th while pitching for the Mississippi Braves before allowing a hit in the ninth inning. Even though he was putting up unbelievable numbers many experts around baseball did not take notice. Josh Norris a writer for Baseball America one of the leading prospect authorities brush off Brigham’s outstanding AA performance by saying “Because he’s 27 years old in Double-A”

After his stretch of Double-A dominance, the Braves took notice and rewarded the right-hander with a promotion to Gwinnett. Once again Brigham was back on the cusp of the major leagues. In his return to AAA, Brigham found himself pitching against a familiar face, his 2014 team the Indianapolis Indians. Brigham came on in relief of Sugar Ray Marimon and picked up the win. That would be Brigham’s one and only appearance with Gwinnett as manager Brian Snitker told him the news he had dreamt of getting from the first days he picked up a baseball as a youngster.  Brigham would be packing his bags and joining the Atlanta Braves in Pittsburgh and the next pitch he would throw would mark his first in the major leagues. 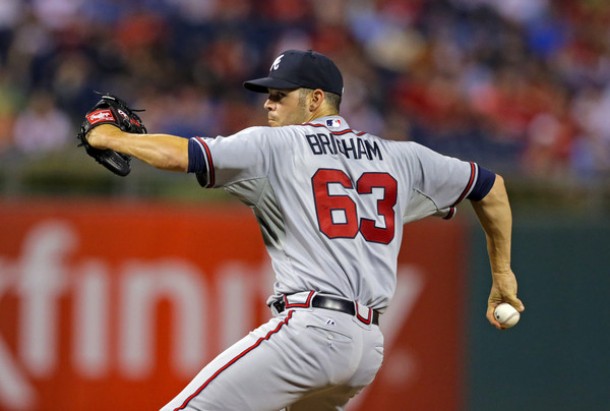 Jake Brigham #63 of the Atlanta Braves throws a pitch in the seventh inning during a game against the Philadelphia Phillies.(July 30, 2015 – Source: Hunter Martin/Getty Images North America)

In two games in Pittsburgh, Brigham would not make his MLB debut and the Braves traveled back to Atlanta to prepare for a home stand featuring the Washington Nationals. In game one of the series Shelby Miller would face off against the Nationals Jordan Zimmerman. Miller was hit hard early in the game and after five innings his pitch count exceeded 100 pitches. Brigham once again received the call to warm up and this time he entered the game in the 6th inning.

Brigham entered the game and pitched a scoreless 6th inning getting Bryce Harper to ground out to first baseman Joey Terdoslavich to end the inning.  In his second inning of work Brigham picked up his first major league strike out getting Wilson Ramos swinging. He would later pick up his second strike out of the inning freezing Ian Desmond for a called third strike. In his final inning of work, Brigham picked up two more strike outs (Micheal Taylor  and Danny Espinosa). Over the course of his three innings (48 pitches/27 for strikes) of work Brigham’s flashed a lethal looking slider to go with his power fastball which touched 94 more than one time in his outing.

While it is just one game in a long 162 game schedule, it was a dream come true performance that Brigham and his family will remember for a lifetime. Brigham’s story is a prime example for everyone out there not to ever give up on your dreams because with hard work, support, and believing in yourself you can succeed. Brigham would have his ups and downs during his time with the Braves and would appear in 11 more contests.

Once again this past off-season Brigham began the cycle of looking for another opportunity as he was once again a free agent. It was reported that Brigham would be joining the Detroit Tigers with an opportunity to compete for a job in spring training but days later that all changed. Brigham received a once in a lifetime opportunity to pitch for the Rakutan Eagles in the Japanese Nippon Professional Baseball League. Brigham was officially introduced recently in a press conference along with other free agent signings and spring training has just got underway.

1. Tell us how you found out the news you were getting called up to the majors?

We had just gotten into Pawtucket. I went to the field early and Brian Snitker called me into the office. I didn’t think anything by it because I had only been in Gwinnett for a few days. He sat me down an told me I would be joining the team in Pittsburgh. I couldn’t believe it. Tears immediately came to my eyes, I could barely talk.

2. What was the feeling like to walk into the major league clubhouse and finally see a locker with your jersey?

It was one of the most amazing feelings. After having worked so hard for so long an to finally see something that had been a pretty much just a pipe dream at that point. I never gave up on that dream though. I had plenty of opportunity to give up on it.

3. You made your debut against the Washington Nationals and pitched three scoreless innings striking out four batters. What do you remember most about your debut?

Besides I couldn’t breathe that whole night. The first thing that I remember is when I got to the mound I couldn’t believe how bright it was ha. I was glowing I felt like. I was thinking people can see me for miles, so don’t screw it up.

4. What did you learn from your time in the majors last season with the Braves? How can your experiences in 2015 help you improve moving forward?

I learned so much from so many good people while I was up. How to compete get through failures. As pitchers it’s always about the pitch you are throwing never about the one after or one before. So realizing that making a good pitch at any level will get guys out.

5. It looked like you were set to play you 2016 season with the Detroit Tigers however you ended up signing with Rakuten. How did that opportunity come about?

It’s something that I have thought about an discussed with my wife and agent the last couple years. It’s been an interest of mine. So when Rakuten contacted me an we were able to negotiate a deal we were all ecstatic.

6. What are you most looking forward to about your upcoming experience playing baseball in Japan?

Experiencing a new culture. Not to visit a place but to actually live and be an everyday part of their society. To be able to have my wife and daughter there and create such wonderful memories as a family we are truly grateful for this opportunity to do that. Oh ya and I get to play baseball in a country that lives and breathes baseball. That will be a blast.

A special thanks to Jake Brigham for taking time out of a very busy schedule in Japan to answer some questions once again for us. Please be sure to follow Jake as he chronicles his experiences in Japan at @JBrigham49. Please like Chasing MLB Dreams on Facebook and follow us on twitter @CTD_Sypien as we continue to follow Jake Brigham during his new adventures in Japan.