In this weeks Chasing The Dream feature we take a look at New York Yankees prospect Zachary Wilson. We take a look at his journey that led him to the Yankees as well as hear from him what a typical training day was like as he experienced Spring Training for the first time. 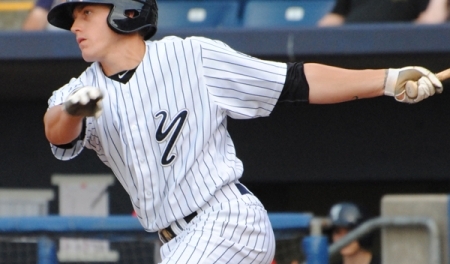 Drafted:  New York Yankees in the 21st round of the 2011 MLB June Amateur Draft

The road to the majors has many starting points, for New York Yankee prospect Zachary Wilson, that starting point officially occurred when he was selected in the 21st round of the 2011 draft.  For Wilson however that journey could have started three years sooner as he was selected straight out of high school by the Pittsburgh Pirates. In this weeks Chasing The Dream feature we take a look at Wilson’s journey that led him to the Yankees as well as hear from him what his first spring training experience was like.

Wilson, a native of Long Beach, California played his high school baseball at Woodrow Wilson High School. During his junior and senior seasons, he was named a first-team all-league  selection and in 2007 his team was ranked 1st overall in the nation as the best high school team in baseball by Baseball America. Wilson’s high school career came to an end and in the 2008 draft he was selected by the Pittsburgh Pirates in the 26th round. This posed a dilemma for the young first baseman as he had a commitment to Arizona State University to play baseball there. The commitment was one that he stayed true to as he passed on the chance to start his professional career and instead experience all that college had to offer.

As Wilson’s college career began he saw time primarily as the teams designated hitter. During his freshman year he started 26 games and appeared off the bench in 12 more hitting  for a .275 average. The following season it was more of the same for Wilson has Arizona State used as a Designated Hitter. Starting at DH in 47 games and racked up 186 at bats or the season. Wilson crushed opposing pitchers to the tune of a .349 batting average and saw his home run total increase from zero as a freshman to eight as a sophomore. During the offseason Wilson played in the Cape Cod summer league. Playing for the Wareham Gateman, Wilson batted .294 with 5 home runs and 15 RBI’s. He was named to the Cape League All-Star team and played in the All-Star game at Fenway Park.  Entering his final season with the Sun Devils, Wilson finally was not a fixture as the teams Designated Hitter, he would start all 61 of the teams games as a first baseman. At the plate however, Wilson’s numbers took a bit of a dip. He only batted .258 for the season and contributed seven home runs while driving in 44 runs. This however did not prevent him from being drafted as the college season was coming to an end. With their 21st pick in the 2011 draft the New York Yankees selected Zachary Wilson, not as a DH or a 1st Baseman however, the Yankees selected Wilson as a third baseman. A position that Wilson would have to adjust to after playing first base for most of his baseball life.

Quickly signing with the Yankees, Wilson was assigned to the Yankees short season class A affiliate in Staten Island. The bulk of Wilson’s playing time with Staten Island came at third base, making 26 starts at his new position. The Yankees also experimented with him in the outfield and he even saw a little time at his old familiar home of first base. While in the field Wilson was experiencing many new things as he tried to learn the ins and outs of new positions at the plate Wilson settled right in. Wilson hit .256 for the season and showed off his power slugging 10 home runs and driving in 31 in just 234 at bats. Wilson not only earned valuable experience by signing fast and getting into game action but he also got a taste of what its like to play in the playoffs as The Staten Island Yankees ended their 2011 season by becoming champions of the NY-Penn League.

With the 2012 season just getting under way the Yankees have promoted Wilson up not one level but two. Wilson is the starting third baseman for the Tampa Yankees in the Florida State League. While it’s a small sample size as the Tampa Yankees are only five games into their season, Wilson is off to a solid start with the bat. In 20 at bats he has 6 hits and is hitting an even .300. 2012 will be a year of adjustments for Wilson as he enters his first full season of  professional baseball. Challenges await as he continues to learn a new position as well as facing more advanced pitchers of the Florida State League as the season progresses. We will be following Zach all season long year at Chasing The Dream so be sure to check back as the season progresses for more news on him as well as the other players we have featured.

We were lucky enough to ask Zack some questions but before we did that we asked Zack to take us through a typical day (game and non-gameday) as he experienced Yankee spring training for the first time.

Non game day would start out by getting to the complex around 8am and grabbing some breakfast. Then I had to get ready to head out to the field by 9am. We would do team stretching and agilities then go straight into conditioning. Then we would warm up our arms for all of our defensive work. First we would have our team defense segment and then we would go into individual defense. After defense we would do some base running work while they were setting up for our batting rotation. In our hitting rotation we would have a two cage groups, one live group and the other on defense. Once hitting was done we would change and get into our weightlifting groups and get a lift in for the day and that would wrap up a non game day.

A game day at home we would stretch around 9am, get our arms loose, and do some conditioning first. After that we would do a short team defense segment and an individual defense as well. After that we just do batting practice, rest for a little bit and then its game time. An away game day we would stretch at 8:40am, go straight into batting practice, hop on the bus to the field and start the game.

To take care of my body and rest every chance I get. The days are very long. I would have to say just meeting all the guys in the organization and getting to know everyone that you will be playing with in the upcoming season.

What was it like being drafted? What were you doing when you found out?

It was a pretty fun and quick process for me. I got to experience the draft out of high school as well but chose to attend college first. I really wanted to get out there and start playing as soon as i could. When I found out I was actually at practice with ASU getting ready for the post season.

Did you have a feeling the Yankees might select you in the draft? Who was the scout mostly responsible for you becoming a member of the Yankees?

I had no idea who was going to draft me. It was up in the air for me. The Yankees scout that I talked to was Steve Metko.

After being drafted you made your Professional Debut at Staten Island? What was the hardest part of transitioning to pro-ball?

I made my debut in Staten Island which was a lot of fun. Great place to start my career off. The hardest transition for going into pro-ball had to be keeping my body and legs feeling fresh everyday as best as I could. Playing everyday takes a toll on your body. So I would have to say getting used to playing everyday for a few months straight.

With Staten Island you hit 10 home runs in a little over 200 AB’s, Tell us a little bit more about your game at the plate and in the field?

My game at the plate is pretty simple for the most part. I don’t like to make things to complicated or else things start getting to hard. All I really try to do at the plate is get a pitch that I know that I can do something with and not try to do too much with it. In the field I had to get used to a new position. I played first base through college then the Yankees drafted me as a third baseman. I just work on getting the best hop and making a good throw for the out. Also always making sure I know the situation I’m in so I know what I want to do when the ball is hit my way.

Playing in the Yankees organization there is a lot of tradition and history. Is there anything in particular the Yankees teach or stress in when coming into the organization?

The one thing that they put the most stress on is Play hard everyday you step out on that field.

What was the biggest thrill of your first year of professional baseball?

My biggest thrill of my first year definitely has to be winning the New York Penn League Championship.

Heading into 2012 what are your goals for the season and is the any particular area of your game you hope to work on?

My main goal is to win a championship wherever I am playing. The area of my game that I have worked on the most this spring is my defense and getting better at the new position.

A Few For Fun
Favorite Baseball Player and Non Baseball Athlete Growing up?

Still haven’t found a song yet. Still in the search of one.

I would like to thank Zach for taking some time out of his schedule to not only answer some questions as the regular season gets underway but also walking us through a day of spring training. I look forward to following him during the 2012 season and into the future. If you don’t already please follow Zach on twitter at @Z_Wilson24.  Also please give us a follow for updates on Zach and other featured players all through out the season. You can follow our site at @CTD_Sypien