As pitchers and catchers begin to report to spring training this week. We take a look at one of the most versatile players in the Atlanta Braves system, Barrett Kleinknecht. Find out inside if he likes playing all over the diamond and what job he picked up in the off season to keep himself busy. 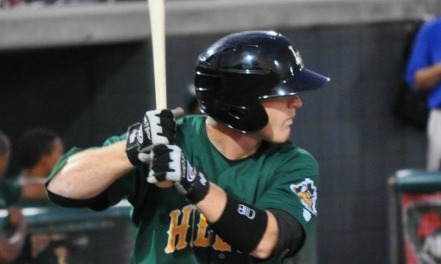 Drafted:  Atlanta Braves in the 12th round of the 2010 MLB June Amateur Draft

When Barrett Kleinknecht’s name was announced in the 12th round of the 2010 MLB draft it marked a continuation of a remarkable streak of players coming out of the Francis Marion University’s baseball program. Over the course of the last nine seasons the small division II school has produced nine MLB draft picks. Kleinknecht ranks as the highest draft pick ever selected from the University. Located in Florence, South Carolina Francis Marion University is the home to approximately 3,900 students. For Kleinknecht, the city of Florence not only represents where he went to college but also represents a hometown he proudly represents.

Over the course of two seasons at FMU,  the infielder appeared in 107  games and registered a .372 average with 22 homers and 110 rbi’s. Kleinknecht helped lead the FMU Patriots to one of their best seasons ever in 2010. The team earned their second consecutive trip to the NCAA Division II tournament and reached the 40 win plateau for only the second time in the schools history. In the field Kleinknecht was used at every position, even on the mound. The only position he did not see time at was behind the plate at catcher. On the mound the right hander put up some impressive numbers going 6-1 with an ERA of 1.74.

When the Braves selected Kleinknecht in the 2010 draft, many teams including the Braves were intrigued by his versatility and his ability to play at any position. This would prove to benefit Kleinknecht as he has made his way through the Atlanta System. After signing with Atlanta shortly after the draft, Kleinknecht was assigned to the Danville Braves in the Appalachian league. Appearing in 53 games, Kleinknecht batted .301 with 5 home runs and 35 rbi’s. He was used in a variety of roles getting the majority of his starts at 3rd base but  he also started games at 2nd base and shortstop. His solid numbers earned him an end of the year promotion to the Braves class A affiliate in Rome. Appearing in only 6 end of the year games, Kleinknecht got a taste of stiffer competition. In his 19 at bats he managed 3 hits and a .158 average. This however was a stepping stone for what would be to come in 2011.

As the 2011 season started, the infielder found himself back in Rome where his prior season ended. After appearing in 30 games for Rome both at 1st base and 3rd base, Kleinknecht was recalled to the Braves advanced class A team, The Lynchburg Hillcats. He would remain there the rest of the 2011 season. His versatility came in handy as he started at every infield position around the diamond. This enabled the infielder to amass 316 at bats and get some valuable experience. Over the course of the season Kleinknecht batted .209 with 7 home runs and 29 rbi’s. Although his numbers were not equal to those of his first professional season, Kleinknecht had advanced two levels and was getting a taste of tougher competition. Advanced class A pitchers tend to mix in more pitches and focus less on simply commanding their fastball. Kleinknecht hopes to put to use what he learned and adjusted too in 2011 in the upcoming 2012 season.

As Major League camps begin opening up all around baseball this week and minor league camps soon to follow what will the 2012 season hold for Barrett Kleinknecht? One thing we know is his desire to succeed and his versatility all over the diamond will make him and important piece in the Braves organization not only this year but into the future. We look forward to following him all season long as he continues chasing his dream to the major leagues. Be sure to follow Barrett on twitter at @bkleinknecht and you can follow us at @CTD_Sypien.

It felt like one of those dreams that you wake up from but try to go back to sleep so you don’t miss any of it. I felt that I finally get to decide what I want to do in the future which was play baseball.

What were you doing when you found out you were selected? How did you celebrate?

I was actually on my way to hit and field with a summer league team in my hometown (Florence Redwolves – Coastal Plains League). My family had a small get together with my family and close friends and my aunt and uncles house.

The Braves are widely known for being a great organization at developing players. Is there anything in particular that they preach to young players at the level you played at last season?

Honestly they preach the same at all levels; they treat us like we are already in the big leagues so they expect us to act the part on and off the field. The biggest thing they preach isn’t really baseball related. It’s to be good people first and to respect the game of baseball which isn’t the top thing on most organizations list.

On that same note – Has the been an instructor or coach in the braves system that has been a big influence on you and why?

Carlos Mendez who was my hitting coach my first year and the start of my second year. He played in the minor leagues for 8-9 years and was very successful but that’s not the main reason. He took the time out of his schedule not only to throw extra to me and to give me hitting tips but also tips about life and how things work in the minor leagues. Even after I moved up to Lynchburg he stayed in contact with me and kept up with my season while sending me encouraging texts or texts telling me to pick it up.

With Lynchburg you played all over the diamond last season. Is there a particular position you are most comfortable at and is it hard going out there each day not knowing were on the lineup card you might be penciled in at?

Starting off my career I was a 3rd baseman and then moved to 2nd in my first year some. When I arrived to spring training last year I was informed that I would move all over the diamond and after my first day working at all positions I wasnt sure I was going to like it. As the season progressed I figured out my role on our team was to fill in at the different positions as needed. At first I thought it was a bad thing but then I found myself playing in almost every game so there was nothing to be upset about. Once this season I was penciled in at 4 different position before the game and I sat back and thought “I guess there aren’t many people who can do that or are willing to do that”. So to answer your question yes, I don’t mind showing up to the park and not knowing what position I will be at that day. I love to work and get better so playing all positions (besides pitcher) is a challenge that makes me a stronger player.

What did you do this offseason to keep yourself busy? When do you report?

I worked construction up until the second week of Jan and lifted all through the offseason. I spent some time hunting with my cousin and friends as well. I also spent a lot of time with my girlfriend because due to her busy softball schedule at Francis Marion University and working over the summer, we wont get to see each other much. I report for mini camp March 1.

Going into 2012 – what are your current strengths as a baseball player and what it the part of your game that you hope to improve the most in 2012?

I think my biggest strength is my versatility, not many guys in the MLB or MiLB can play all positions on the field. I also think my work ethic is a huge part of who I am today. I have and will continue to improve on the mental aspect of the game because the level im at now, that is what separates big league guys from career AA and AAA guys.

Desperate Housewives thanks to my girlfriend and her dad.

Who is the biggest prankster you have met in your pro-career?

A special thanks to Barrett for taking some time out of his off-season schedule to sit down and talk a little baseball with us. Once again please give him a follow at @bkleinknecht and follow us at @CTD_Sypien as we follow Barrett and others during the 2012 season.

2 Comments on Chasing The Dream: The Barrett Kleinknecht Story and Interview