When the Kansas City Royals drafted Christian Colon in the 1st round (4th overall) they not only saw a potential star but they saw a potential leader of their team for many years to come. Find out inside what future HOF shortstop his leadership skills are often compared too.

Drafted:  Kansas City Royals in the 1st round of the 2010 MLB June Amateur Draft

As the 2010 draft approached there were three players often talked about as being the top three in the draft, young phenom’s Bryce Harper, Jameson Taillon and Manny Machado.  After the top three scouts, publications and experts all had different opinions on who would be selected next. For the Kansas City Royals they knew exactly who they would draft next and with the fourth pick overall in the 2010 draft they selected infielder Christian Colon. Coming out of Cal State Fullerton, the shortstop was described as solid, balanced and with a reputation of being a leader. Scouts often drool over tools but one thing that can not be measured like tools can is leadership. As we take a look at Colon’s career so far one thing that you will notice is everywhere Colon has played he has been a leader so much so that his leadership characteristics have even been compared to those of future Yankees Hall Of Fame shortstop Derek Jeter. 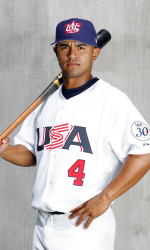 Colon as a member of Team USA

Colon got his start playing baseball at a young age in Puerto Rico where he was born. By the time his family moved to the United States, Colon’s skills were beyond advanced for his age. As Colon entered his high school years he was honored with many accolades. As a freshman he won all state honors in the baseball rich state of Texas. As a sophomore he was once again honored as an all state player, this time for the state of Utah. As his family moved, due to his fathers job commitments, Colon found himself in California for his final two years of high school baseball. Colon starred for the Canyon High School team with another major league prospect, Grant Green who is one of the top prospects in the Oakland A’s system. Green and Colon made up the center of the infield with Colon playing second base. Also during the 2006 season, Colon played in the AFLAC All American game which highlights the nation’s top high school talents. Once the AFLAC game had ended, Colon was announced as the games MVP. Once his high school career came to an end, Colon prepared himself to play baseball at Cal State Fullerton. The Padres however, had some other ideas as they selected him in the 10th round of the 2007 draft and tried to sway him from his commitment to school. The Padres efforts failed and Colon was off to start his career as a member of the Cal State Fullerton Titans.

As a member of the Titans baseball team the accolades just kept coming. He was named a freshman All-American by baseball publication Baseball America and the following season he was named as a second team All-American. Not only did he put up solid numbers all across all statistical categories but he started every game in his college career but one. Christian Colon stepped aside and allowed his teammate Joe Scott to start at shortstop on Cal States senior day. With the exception of that day the Titans could count on Colon making a difference at the plate and on the field each and every game. At the end of the 2009 season Colon was honored as a finalist for the Brooks Wallace Award which recognizes the top college shortstop in the entire nation. Besides performing at a high level in College, Colon also had the honor of playing for Team USA. Few players have ever contributed as much to USA Baseball as Colon, who has played for the team four different times in his career. Colon was the only player who returned in 2009 from the undefeated 2008 collegiate team. Team USA coach Rick Jones named Colon the team’s captain, a recognition that no player had received up until that point in the history of Team USA. Coach Jones cited his experience, along with the respect Colon commanded in the dugout as the reasons for making such a decision. With Team USA in 2009 Colon took his game to another level hitting .362 with 5 home runs and 37 RBI’s these numbers combined with the his reputation of being a natural leader sent Colon’s stock rising as the 2010 draft approached.

Colon at the plate with the Wilmigton Blue Rocks

It did not take long for Colon to hear his name called when the draft took place as the Kansas City Royals made him the 4th player selected. It also did not take long for him to put the Kansas City blue on as he quickly inked a deal that included a reported 2.75 million dollar signing bonus. The infielder quickly made his debut as a member of the Wilmington Blue Rocks, the Royals advanced class A team, in the summer of 2010. Overall he appeared in 60 games at shortstop and put up solid numbers batting .278 with 3 home runs, 30 RBI’s and a .705 OPS. In 2011 Colon faced new challenges. In his first full season of professional baseball the Royals promoted him up one level to their double A affiliate, the Northwest Arkansas Naturals.  Though he got the majority of his starts at shortstop, (99) he did see 15 additional starts at second base. The first time he had started there since his high school days with Grant Green. Playing at double A is a challenge for most and Colon was no exception. Statistically his numbers dipped a bit from his 2010 debut but the competition gets tougher as you move up the levels of baseball. Appearing in 491 official at-bats Colon posted a .257 avg to go with 8 home runs, 60 RBI’s and a .668 OPS. While those numbers may not be eye popping, Colon hopes to improve on them as 2012 approaches. He has dedicated himself this off season to better prepare for the grind of a full major league season. He has worked on his game and his conditioning. On his website Colon7.com he has kept his fans and followers up to date on his offseason conditioning and workouts. Once you view his site, its obvious Colon is committed to becoming the best player he can possibly be and that he loves the game of baseball.

What will 2012 and the future hold for Colon? Will he stay at shortstop or transition to second base? Will he advance to triple A or maybe even make his major league debut with the Royals? Those questions and others have yet to be answered. We were lucky enough to be able to have Christian answer some of our questions before his season gets started and you can see them below. We will be following Christian during the entire 2012 season and in to the future. You can follow Christian on Twitter at @C_Colon4 and you can also follow us on Twitter at @CTD_Sypien.

You were drafted twice. First in 2007 by the Padres and then in 2010 going 4th overall to the Royals. Can you explain what it was like being drafted each time?

It was an amazing process for me getting drafted both times I was honored to be picked by the Royals such an amazing organization. It was exciting and seriously the best thing that has ever happen to me I am very thankful.

You also have had the opportunity to play for Team USA. What was that experience like for you and is there a particular moment that stands out for you from your time on Team USA?

I loved playing for TEAM USA I had a lot of fun and yes when I was named the Captain it was the best moment for me and winning the gold in 08 going 24-0.

Last year you made starts at both SS and 2nd Base. Which position do you prefer and have the Royals talked to you about staying at one position or the other?

I love shortstop but I also love second base so it’s the same for me and no they have not.

Is There a coach or instructor since you entered pro ball that has really helped or made an impact on your career so far?

Yes! I would say Rusty Kuntz has been the one Coach in Pro Ball to talk to me the most and has helped me develop

What has been your most memorable moment as a pro so far in your career?

I think the most memorable moment as a Pro is playing my first full season in double A and making the playoffs.

What have you done this offseason to keep yourself busy and also prepare for 2012?

I have worked very hard this off season that’s all I have been doing. Can’t wait to start this season. I feel a lot more comfortable now.

What are you goals heading into spring training and the 2012 season?

My goals are to play to win every time I step on that field and hopefully start in Triple A.

Whats currently playing in your Ipod or CD player?

I like YMCMB, Lil Wayne, Drake, and Rick Ross they are all playing on my iPod.

Whats movie is sitting in your DVD/Blu Ray player?

A special thanks to Christian Colon for taking some time out of his off-season schedule to sit down and talk a little baseball with us. Once again please give him a follow at @C_Colon4 and follow us at @CTD_Sypien as we follow Christian and others during the 2012 season.

3 Comments on Chasing The Dream: The Christian Colon Story and Interview

Copyright © 2020 Create a free website or blog at WordPress.com.