The 2010 MLB Draft was held June 7th through the 9th. In the third round of that draft, the Arizona Diamondbacks selected Robby Rowland a right handed pitcher from Cloverdale HS. Located about 80 miles from San Franciso California, Cloverdale has produced a line of Rowland draft picks. Rowland’s father and brother also graduated and were drafted by major league teams. After the draft, Rowland did have a decision to make. 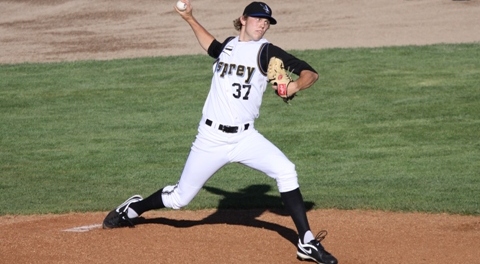 Drafted:  Arizona Diamondbacks in the 3rd round of the 2010 MLB June Amateur Draft

The 2010 MLB Draft was held June 7th through the 9th. In the third round of that draft, the Arizona Diamondbacks selected Robby Rowland a right handed pitcher from Cloverdale HS. Located about 80 miles from San Franciso California, Cloverdale has produced a line of Rowland draft picks. Rowland’s father and brother also graduated and were drafted by major league teams. After the draft, Rowland did have a decision to make. The Oregon Ducks had offered him a baseball scholarship to pitch for the baseball team. While Oregon does have a great baseball program Rowland’s decision was a quick and an easy one. He wanted to play professional baseball and he wanted to play now. The Diamondbacks offered Rowland a reported $395,000 signing bonus to become a member of the organization. He soon found himself off to Montana and in uniform for the Missoula Osprey.

Rowland pitches for the Osprey

The Rowland name has been in baseball for a number of years. Rowland’s father Rich was drafted in the 1988 draft by the Detroit Tigers. Rich Rowland was a catcher and spent a total of  ten seasons in professional baseball.  Parts of six of those seasons were spent on big league rosters with the Tigers and Redsox. His best season was the 1994 season with Boston, he hit 9 home runs that season and appeared in 39 games at catcher. The Red Sox stable of pitchers that Rowland got to catch that year consisted of veteran all stars Roger Clemens and Frank Viola as well as youngster Aaron Sele. Rowland’s brother also spent some time playing professional baseball. He was selected in high school by the Colorado Rockies but opted to attend college. Richie ended up signing a free agent deal with Arizona a day after they selected Robby with there 3rd overall pick. The two brothers played together during the 2010 season. Richie like his father was a catcher and even caught Robby during his professional debut. A memory i’m sure both brothers and their parents will never forget.

Rowland has spent the last two seasons with the Osprey with mixed results. His numbers may not look overly impressive but one thing that everyone must remember is that if Rowland would have went to Oregon he would not yet be eligible for the draft. In two seasons with the Osprey he has started 28 games put up a record of 6-13 with a 7.01 ERA. Rowland has worked with coaches and learned many things at this level. The coaches have worked with him in a transition from becoming a thrower (which gets outs in high school) to a pitcher (which gets outs in the pros). Another thing Rowland recognizes that he has worked on and needs to keep doing is keeping the ball down in the strike zone. Leaving the ball up usually results in hits, runs, and trouble for the pitcher on the mound. If Rowland can continue to throw his five pitch mix for strikes and keep the ball down look for a rebound season in 2012 that will put Rowland on the ladder upward as one of the top pitching prospects in the Diamondbacks system.

What was it like being drafted? What were you doing when you found out?

It was pretty unreal.. having worked so hard for something and finally seeing your goal be accomplished is quite something. I was in the living room with my family watching it on a laptop.

After being drafted what was the signing process/experience like?

Well I knew that I wanted to get a full season it my first year so I didn’t wait to sign my contract.. Just told the scouts top 3 rounds I would sign early and have em ship me out to wherever they felt necessary. It was a great experience but all kind of a blur, I did just graduate from high school about a week before that.

Has the jump from High School to professional baseball been difficult? Whats been the hardest adjustment?

It has been difficult, I wish I could say that it is all the same but it’s not. High School was more of a how hard can you throw stage where I didn’t have to worry about pitch location too much just threw it right down the middle and didn’t have to worry about anyone hitting it. In pro ball every pitch has to be executed or else you’re going to find yourself in some trouble. The ball must be down in pro ball.

In your short pro career whats been your biggest thrill?

My biggest thrill is just putting on a uniform everyday. Sometimes I take it for granted how lucky I am for being only 20 years old getting to play baseball for a living. Not many guys get to say that. I thoroughly enjoy every bit of it.

Give us a scouting report on yourself (what pitches you throw, how hard and what your strengths and weaknesses are)

Well I don’t want to give too much away but I throw 5 pitches. I feel like my biggest strength is that I am able to throw all my pitches for strikes. My weakness so far in my pro career has been leaving the ball up in the strike zone too often.

2012 is going to be a big year for me. Unfortunately I am coming off the worst baseball season of my life and I have a lot to prove. I have worked really hard this offseason on making sure it won’t happen again. Some of my goals consist of playing in a full season and logging over 150 innings. Also regaining my prospect title back. I am looking for a healthy and successful year in 2012.

What was it like to play professional baseball with your brother?

That was probably the most exciting time in my whole life. Knowing someone who you can relate to at all times. I felt much more comfortable with him on the team. I wouldn’t be where I am today if it wasn’t for my older brother.

Well baseball player would have to be my old man just because I grew up watching him, although I used to love watching Clemens pitch. Dad caught him in ’94 and told me some unreal stories about how hard that man worked, just inspired me. Non-baseball athlete would have to go to Larry Bird! Need I say more?

I am an xbox guy.. I used to have the Play Station 1 and 2 but when the third one came out I shifted towards the xbox. I love all the sport games and I will play a little COD here and there but who doesn’t right?

Was it a thrill to see yourself on a baseball card for the 1st time?

Haha oh yeah.. Still is to this day, and probably always will be!

A big thanks to Robby for taking time out to sit down and answer some questions as his road the the majors continues. We look forward to following him during the 2012 season. Please follow  Robby at @RobbyRow_12 to follow his progression in 2012 as well.  At the time of this article Robby is inching closer to 800 twitter followers. Once he reaches that goal he will give away some autographed baseball cards. Follow him for your chance to win!