Canada has produced some of the greatest players in the game of hockey Gretzky, Lemieux, Orr and Crosby to name a few. In recent years while Canada has continued to produce hockey talent it also has begun to produce its fair share of baseball players including current major leaguers Jason Bay, Russell Martin, Justin Morneau and Joey Votto. Oshawa’s own Eric Wood hopes to follow in the footsteps of those current stars and add himself to the list of baseball greats from Canada. We take a look at his journey as he starts his first full season in professional baseball with the Pittsburgh Pirates. 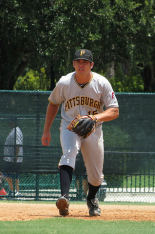 Drafted:  Pittsburgh Pirates  in the 6th round of the 2012 MLB June Amateur Draft

Canada has produced some of the greatest players in the game of hockey Gretzky, Lemieux, Orr and Crosby to name a few. In recent years while Canada has continued to produce hockey talent it also has begun to produce its fair share of baseball players including current major leaguers Jason Bay, Russell Martin, Justin Morneau and Joey Votto.  Oshawa’s own Eric Wood hopes to follow in the footsteps of those current stars and add himself to the list of baseball greats from Canada. We take a look at his journey as he starts his first full season in professional baseball with the Pittsburgh Pirates.

Before beginning his professional career Wood developed his skills playing for a number of amateur teams in Canada such as the Pickering Red Sox and the Ontario Blue Jays. While he was with the  Blue Jays, Wood who saw himself as a pitcher, dominated a home run hitting contest and soon found himself playing the field and batting fourth in the line-up. Scouts slowly began to notice Woods talents and in 2011 the Oakland Athletics selected Wood in the 37th round. The third baseman didn’t sign with the A’s as he knew he was not ready to take the next step into the professional ranks yet.  With the assistance of  the Ontario Blue Jays Jamie Pogue, Wood took his the next step in his baseball career enrolling at Blinn College in Texas.

A long way from the cold Ontario weather, Wood joined the Blinn Buccaneers baseball team. He saw plenty of action during is freshman year, mostly playing the field but he did see some brief action on the mound as well. In his first taste of college baseball, Wood hit .318 in 173 at bats. He showed some power in those at bats as well, hitting four home runs and driving in 39 runners on the season. Besides the prior interest from the A’s, additional teams began to watch Wood, including scouts from the Pirates, Astros and Royals.

Wood won a GCL championship with the Pirates in 2012

As the 2012 draft approached, Wood expected to return to Blinn to continue to enhance his skills and prepare himself for his baseball future. That was the plan at least until the 6th round of the 2012 draft. The Pirates selected Wood, making him the first Canadian player selected in the 2012 draft. Wood and his family received a call from Pirates scout Trevor Haley who had seen Wood play multiple times for Blinn. After some negotiations, Wood signed for a reported 100,000 dollars and found himself wearing a Pirates uniform and seeing his first professional action in the Gulf Coast League.

With the Gulf Coast League Pirates, Wood played regularly at 3rd base and continued to show those flashes of power he showed dating back to his Ontario Blue Jays days. Playing in 36 games, Wood collected 122 at bats in his first season of professional action. The 3rd baseman hit .287 and got on base at a .371 clip. He also added four home runs and helped lead the Pirates to the 2012 Gulf Coast League Championship. After winning the championship the Pirates promoted Wood to their NY-Penn league affiliate, the State College Spikes. Wood appeared in six games as the season came to a close in State College. He hit .200 (4 for 20) in his limited chances at the plate but getting a late season promotion was reward enough that the Pirates liked what they saw in Wood since selecting him.

The 2013 season is now underway and the Pirates aggressively pushed Wood to their full season single A affiliate, The West Virginia Power. The Pirates could have placed Wood back in extended spring training until the NY-Penn season began but opted to challenge the young third baseman. During the first month of the season, Wood has been up to the challenge, hitting .308 for the Power. He also has shown his potential power as 6 of his 12 base hits have been of the extra variety (3 doubles and 3 home runs).  In the field, Wood has struggled a bit early on making the transition to the fields of the South Atlantic League. He has totaled six errors in his first nine games of the season. As the season progresses it will be a challenge for Wood to maintain his hot hitting and improve his fielding but with the Pirates have shown the confidence in Wood they he can.

1. You were drafted twice, can you take a moment and explain what each experience was like for you? What was it like to be drafted each time? What were you doing when you found out?

It’s a funny story the first time I was drafted I wasn’t really wasn’t paying attention because I didn’t get a lot of attention prior to the draft. I received a call from a friend saying he heard I got drafted and words can’t really describe how I felt. The second time, it was the second day of the draft and I really wasn’t expecting anything when I received a call from Trevor asking if I would sign in the 6th round and I was in disbelief. I cried I was so excited.

2. Growing up in Ontario, a traditional Hockey hotbed, is it harder to get noticed / discovered by baseball scouts?

I played for great coach’s growing up who gave me some great opportunities. It really wouldn’t have been possible If it wasn’t for the Ontario Blue Jays and Team Ontario.

3. After high school your next stop in your baseball career was Blinn College in Texas ( A long way from Ontario!) How did you end up at Blinn?

The Ontario Blue Jays had a great guy by the name of Jamie Pogue who helped me get into Blinn. It was a long way from home but I had a great coaching staff at Blinn who really supported me took care of me.

4. Did you have any idea that the Pirates were interested in you prior to your selection in the draft? Who was the scout from the Pirates who was most responsible for convincing the Pirates to select you?

The Pirates were probably the most interested in me prior to the draft. Trevor Haley was the local area scout in Texas. He was at a lot of my games in college.

5. You signed quickly with the Pirates and were able to get your first taste of professional baseball last season. What was the biggest difference between the college level and the professional ranks for you?

I think the biggest difference had to be the pitching. The quality of pitcher you face in pro-ball is much better than college.

6. The Gulf Coast League Pirates won the championship in 2012. What was that experience like for you? Do you have a particular personal highlight or memory from your first season of professional baseball?

The first game of the championship series I went 3 for 5 with 2 doubles off the green monster at Jet Blue Park. We had a really good team and It was special to win it with those guys.

I’m in West Virginia now but My goal is to get called up to high A by the end of the season.

2. I’ve noticed you are a hockey fan. Who was your favorite player growing up and currently?

Mat Sundin was my favorite guy growing up. A Leafs fan of course. Phil Kessel has to be my favorite player now. He gets hot really quick.

3. Which two teams will play for the rights to hoist Lord Stanley?

The Leafs and the Canucks. Gotta have two Canadian teams going at it.

A special thanks to Eric Wood for taking some time out of his busy spring training schedule to chat with us. We look forward to following him all season long and into the future. Please give Eric a follow on twitter @EricWood24 and like us on Facebook and follow us on twitter @CTD_Sypien as we continue to feature and follow all of our featured players as they chase their way to the major leagues.