In our latest feature we caught up with Detroit Tigers prospect Tyler Collins. Find out inside who described him as a “run through a wall type of player” Also find out all about his experience in big league camp and playing baseball in Australia. 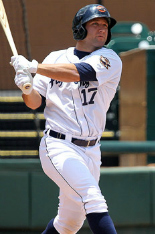 Drafted:  Detroit Tigers  in the 6th round of the 2011 MLB June Amateur Draft

As the 2013 season approaches, Tyler Collins is preparing for his next stop on his journey toward the major leagues. While only 22 years old, Collins baseball journey has already consisted of several interesting stops along the way. Including his most reason stop in major league camp with the Detroit Tigers.

Before the young outfielder began his professional career he starred at Northwest High School in Texas. Over the course of his high school career, Collins hit .430 with 16 home runs and 35 doubles and was named the teams MVP following the 2008 season. Collins was also a three-time all district player for Northwest. While he was not drafted out of high school, Collins planned to enroll and play baseball at Baylor for the 2010 season.

As a member of the Baylor Bears, Collins started 23 games as a freshman and continued to do what he does best, hit the baseball.  Playing right field for the Bears, Collins hit .404 in 89 at bats. He also collected eight extra base hits and drove in 10 runners. Although his first season on the field was a success it did not translate into success in the classroom. Collins was ruled academically ineligible and eventually transferred to Howard Junior College.

At Howard, Collins got back on track in the classroom while he continued his success on the baseball diamond. Under the tutelage of Britt Smith and his coaching staff, Collins produced jaw dropping numbers. The outfielder hit for a .488 batting average and showed power hitting 34 doubles while blasting another 19 balls out of the park for home runs. On the year he produced an on-base percentage of .561 and drove in 82 runners in his 215 at bats. Collins was set to make the jump back into division one baseball with TCU when he was selected by the Detroit Tigers in the 6th round of the 2011 draft. Collins had a tough decision to make between continuing  his college career with TCU or starting his professional journey with the Tigers. 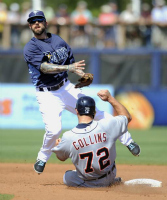 Collins has earned praise by Tigers skipper Jim Leyland for his style of play.

In the end the Texas native decided to start his professional career and signed with the Tigers for a reported 210,000. After signing, Collins was assigned to the Gulf Coast League where he went 1 for 3 in his professional debut. That was the first and the last game Collins would appear in the GCL. He was promoted to Connecticut of the NY-Penn league the following day. Collins played all three outfield positions with the Tigers during the 2011 season and also continued to show a strong bat. Collins hit .313 in 42 games with the Tigers and led the team in home runs with eight.

While most young players Collins age head home for the winter after their first season of professional baseball, the outfielder had other plans. Those plans would take him to the other side of the world. Collins accepted and invitation to play for the Sydney Blue Sox in the Australian Baseball League. Playing in an additional 43 games Collins hit an impressive .298 which included 17 extra base hits, three of which were home runs. He was named to the Australian League world All-Star team and after blasting a three-run home run Collins was named MVP of the game.

Building of a strong first season of professional baseball, Collins was promoted to the Tigers A+ affiliate, Lakeland of the Florida State League. With the Flying Tigers, Collins split time between right and left field and remained consistent swinging the bat despite the fact that he was promoted from short season all the way up to the A+ level.  In 473 at bats the left-handed hitter produced a .290 average while racking up seven homers and 35 doubles. Collins also showed he is capable of stealing a base, converting 20 of his 23 attempts.

In the offseason, the Detroit Tigers extended Collins an invitation to attend major league spring training for the first time in his young career. Collins made the most of his opportunity before recently being reassigned to minor league camp. Collins hit .345 and contributed some big hits for the Tigers during spring training. His performance did not go unnoticed as he consistently earned the praise of Tigers skipper Jim Leyland for his hard work on and off the field.

As the 2013 season approaches, Collins looks to be heading to either Eric or Toledo to start the season. We will continue to follow his journey to the major leagues all season long. Be sure to follow Tyler on twitter @TylerCollins1 and follow us at @CTD_Sypien as we will provide updates on Tyler’s progress all season long.

1. What was it like being drafted? Where were you when you found out?

I was at home playing summer ball in the Texas Collegian League and it was also the day after my birthday. So I guess you could say it was a pretty good birthday! I had a nice dinner with my family afterwards to celebrate the good news.

2. Before being drafted you originally attended Baylor but ended up being drafted out of Howard College. How did you end up at Howard?

I did a year at Baylor but was unfortunately deemed academically ineligible. After my freshman year I transferred to Howard Junior College. Howard was fantastic. They welcomed me with open arms and helped me set my grades straight. They had my academics ahead of baseball. They made that obvious from day one. I had about a 3.8 when I left there. On the baseball side it was fantastic, Britt Smith is the head coach there and he and his staff were just unbelievable.

3. After being drafted and playing out the remainder of the 2011 season. You went on to play in Australia. What was that experience like for you?

Australia was fantastic. The people over there are great and my manager from short season with Detroit was one of the coaches in Australia. The baseball over there is great. They have a great thing going on. The program there is building every year. Sydney was fantastic, the fans really showed support for baseball and welcomed an American like me with open arms.

4. Since joining the Tigers organization is there a particular instructor or coach that has really helped you in your development as a player?

All the coaches have been more than helpful and they are fantastic in what they do but if I had to say one that stands out more than others it would be my hitting coach this past year, Larry Herndon. I have never met a better human and on top of that someone who cares so much about a minor leaguers baseball career. Hondo is the kinda guy who will stick with you year after year, if you wanted to call him up three years after you had him you could and he would help.

5. 2013 is your first experience in big league camp. What has surprised you most about your experience so far?

The most surprising things is that the big leaguers are humans too. What I mean by that is you see guys like Miguel Cabrera and Justin Verlander on TV and guys like that can kinda become superheros to you with the things they are able to do. Getting a chance to interact and work with them you realize they are people, there is more to them than being an incredible baseball player. It’s great to be able to get to know them and what great guys they really are.

6. You have made the most of your opportunity so far in spring training hitting about .350 in camp. What are your expectations and goals heading into the regular season?

7. Jim Leyland recently described you as “One of those run through the wall type of guys who runs good, has power and is strong as bull” How would you describe yourself?

I think if someone with the credentials Jim Leyland has would say something like that I wouldn’t argue with him. I couldn’t be more pleased with someone like Jim Leyland speaking highly of me like that.

Rusty Greer – I was a big Rangers fan growing up and he coached me for a year in high school.

I went with a Latin Song last year. I haven’t pinpointed a song yet but I am a big fan of the latin community and their music is fantastic. I will have something picked out in the next couple of weeks.

3. March Madness is here, who is your pick to win it all?

I’ll take a shot in the dark and say Gonzaga.

A special thanks to Tyler Collins for taking some time out of his busy spring training schedule to chat with us. We look forward to following him all season long and into the future. Please give Tyler a follow on twitter @TylerCollins1 and like us on Facebook and follow us on twitter @CTD_Sypien as we continue to feature and follow all of our featured players as they chase their way to the major leagues.