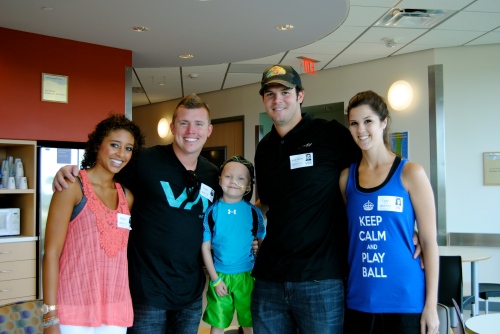 Sports occur all year round. Many of them garner national attention on television, the internet and in the newspaper. One many occasions these outlets share with fans the stories of breathtaking performances, record setting moments and the roads teams or individuals have taken to each the championships at there given sports. All too often today sports are also laced with headlines that are not so flattering. Weather it be team headlines, such as the New Orleans Saints bounty scandal or individual headlines of performance enhancing drugs, DUIs, and weapons and assult charges.

Outside the lines and off the fields many athletes do some great things in their hometowns, or their newly adopted towns. Many times these things only get a quick mention and many times they aren’t mentioned enough. A few months ago we featured the story of  Jake Brigham as he was set to start the 2012 season. He had just received some great news that he would be added to the Texas Rangers 40- man roster and he was looking forward to making a strong impression. Brigham has followed through on those goals leading the Frisco Roughriders in innings pitched and strikeouts. Off the field Brigham and his wife, Taylor have done a lot more and have began to make a big impression on the Frisco community.

A Mike Olt Basket featuring a signed bat and cleats will just one of many prizes involved in the fundraiser.

I recently caught up with Taylor Brigham who told me about some of the work she and Jake have been involved with this season and about an exciting event coming up.  Earlier in the season the Brigham’s met a youngster by the name of Grayson Hughes who was recently diagnosed with  leukemia at the age of 6. “I knew we wanted to help! Although financially we couldn’t do all that we wanted.”  Brigham said “We have an awesome platform and started brainstorming of ways we could use it.  I presented my ideas to the Riders and we were able to team up with a non-profit organization, Kennas Kids that reaches out to individual families with children experiencing medical challenges at a young age”

The Brigham’s along with Texas Ranger pitcher Robbie Ross and his wife decided to get involved with Kennas Kids and now on June 22nd and 23rd during the RoughRiders games there will be a silent auction that will be held by the RoughRiders and the players wives and girlfriends. During the games Brigham stated “player baskets filled with signed gear and some of the players favorite items will be auctioned off. We will have 20 baskets filled with Marucci bats to gloves. We have 12 major league baseballs signed from the Rangers, Manager Steve Buechele Chicago Cubs jersey, Roy Oswalt and Greg Maddux baseballs and Justin Grimm is donating a baseball he used from his major league debut!!”

Besides all those great prizes there will also be a raffle for a chance to win Roughrider team signed baseballs (7 in all) as well as a mystery signed ball of a Texas Ranger player.

If you are interested in taking part and are in the Frisco area doors will open at 6:00 to the public.  For purchase of tickets please visit http://www.milb.com/index.jsp?sid=t540

For more information on Kennas Kids or if you are interested in making a donation you can go to http://www.kennaskids.org/donate.html

For more information on Grayson Hughes, the family has created their own website which shares his story: http://www.whenskiesaregray.com

Stories like this are common all around sport, many are not publicized.  As we follow each player we feature, we plan on following them as they chase their way to the majors. Sometimes these stories can take us outside the playing field. The Brigham’s story is one of those and we are fortunate enough to continue to be able to tell it. A special thanks to Taylor Brigham for talking to us about the upcoming event planned and for providing us with the links above for those who are interested in reading and learning more about a great cause they are involved with.