Today is our premier edition of the Friday Five. Each Friday we will take a look back at the last week of the season and highlight some of the best performances of those we have featured on our website. We hope you enjoy this new edition to the site as we follow these players as they chase their way to the major leagues.

Today is our premier edition of the Friday Five. Each Friday we will take a look back at the last week of the season and highlight some of the best performances of those we have featured on our website. We hope you enjoy this new edition to the site as we follow these players as they chase their way to the major leagues. 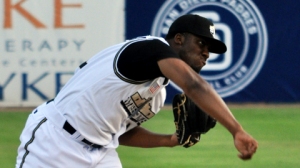 Sampson with the Missions (milb.com)

Last season Keyvius Sampson was impressive at the Single A level pitching for the Ft. Wayne TinCaps. After an aggressive promotion to the Double A level to start the season, Sampson has proved early on that the Padres have made the right decision. In two starts verse the Tulsa Drillers Sampson  (1-0) has been in control. Over the course of his 9 1/3 innings pitched the right hander has struck out ten and only allowed seven hits. Opposing batters are only hitting at a .203 clip early on and if it wasn’t for early season pitch counts Sampson’s record would stand at 2-0.

Another pitcher who got the year off to a good start was Texas Rangers prospect Jake Brigham. In his April 8th start against the Arkansas Travelers Brigham pitched  6 innings of shut out baseball. He only allowed three hits while striking out four.  Brigham was unable to pick up the win as the game ended up going into extra frames. The RoughRiders did end up picking up the win in eleven innings and Brigham’s 6 scoreless where a big part of the teams victory.

After a solid spring training and almost making the Pittsburgh Pirates as the back up to Rod Barajas catcher Eric Fryer has been on fire to start the first week of the season with the Indianapolis Indians. On the field Fryer has started the majority of the games this season behind the plate however he has also seen action in left field. At the plate Fryer’s bat has been on fire. In 24 at bats this season Fryer is hitting at a .417 clip with an OPS of 1.023.

After a slow start with the bat in Colon’s opening series with Corpus Cristi the shortstop has began to get in a groove.  After just a 2 for 18 start in his first four games Colon has went 7 for his next 14 skyrocketing his average up to .313. Colon looks to get plenty of at bats and chances to get on base hitting near the top of the Naturals order.

Steven Henley who has been a starter for most of his career in the Mariners organization has a new role in 2012. He will be coming out of the bullpen to start the year and with success could move rapidly through the system and into a spot with the Mariners in the bullpen. Hensley has appeared in three outings in the first week of action and has allowed one run in four innings of work. While its only a small sample size batters are hitting just .143 against Hensley in his early appearances.

Please provide feed back in the comment box below or via twitter at @CTD_Sypien on what you think of the Friday Five. Do you like the feature and want to see it continue? You feedback is important as we want you the reader to enjoy every aspect of Chasing MLB Dreams.